skip to main | skip to sidebar

It all comes down to the facial hair, doesn't it?

Panel 1:"For example, threaten to flog them with your paddle. That should hold them for a good, long time."

Panel 2:More likely, it will result in Ranger Buzz getting his ass kicked six ways to Sunday. Poor guy.

Panel 3:"If not, you can probably just find me floating face down in the lake!"

Panel 1:You know what? I think Mark just might pull off this "Japanese tourist" disguise.

Panel 2:Nooo. Really? Shit, I thought they just did it for sheer meaningless randomness.

Panel 3:The liquor part? If it had been me, I would have snuck up on the poker part.

Panel 1:Well, if there had been any doubt as to the nature of the Parker Brothers, it's certainly cleared up now. Look at all that facial hair!

Panel 2:What a fucking rube. No doubt he'll be surprised when they don't slow down as they plow over his canoe.
Posted by Drogon Saurischian at 9:18 PM 8 comments:

Ranger Buzz will make you wet.

Panel 1: "At which point I'll add this canoe to the list of inanimate objects I have mistreated in unspeakable ways on this trip."

Panel 2: "In other words, you be the bait. Please ignore the fact that bait is typically killed in the process of catching fish."

Panel 3: You know, Mark could have had Buzz change shirts back at the Grable dock. But, of course, that would have permitted Jan to see Buzz's rippling torso, which, given his alpha-manliness, would likely have sent her into paroxysms of ecstasy, whereupon she would probably have torn off her bathing suit and thus subjected Mark to the nauseating sight of the naked female body and its various erogenous zones. Mark, of course, wanted to avoid this profoundly debilitating series of events and, thus, conveniently "forgot" to tell Buzz to change his shirt.

Panel 1:He's a real politician? What the fuck is that supposed to mean? He's not a wax facsimile of a politician in Madame Tussuad's museum? He's not an actor playing a politician on TV? What?

Panel 1:"And, hopefully, you'll be dressed in something as revealing and sexy as that bathing suit you stole off the corpse of Betty Grable!"

Panel 3:"Clank...clunk....grind..." That's the sound of Mark's brain striving to make a connection between the various clues concerning the Parker Brothers, Senator Wallace, and the restaurant.
Posted by Drogon Saurischian at 5:17 AM No comments:

Panel 1: Just for the record, the Jackelrod Sphere has now presented us with 18 separate bird images since February 8th. Compare this with the 6 non-human mammals, the single amphibian, and the single fish images it's given us. I'm detecting some sort of pro-avian bias here and I, for one, am deeply disturbed.

Panel 3:Not really. What's interesting is what Mark is doing to that helpless sleeping bag in the background. That and the fact that he's obviously returning to Wet Lake to exact his revenge on the Parker Brothers who, you may recall, totally whupped his ass.
Posted by Drogon Saurischian at 7:21 PM 3 comments:

Let's Recap, Shall We?

Ok, so I'll be the first to admit that yesterday's vodka-fueled efforts, while enjoyable (for me), didn't really do much in the way of clarifying the current story-line. Thus, I shall conduct a recap. Of course, I don't have access and/or don't care to obtain access to the strips from January 5 through February 7. I think, however, that I can extrapolate what happened. It goes a little like this:

*Note the incomprehensible statement by Tim, the not-too-bright Senate staffer, in which he concludes that it is strange that someone who dislikes the outdoors is opposed to preserving it. This, of course, is a perfectly normal position and, in fact, represents one of the planks of the modern Republican party.

Anyways. Now that you have the facts straight, let's dive into today's strip shall we.

Panel 1:It's not entirely clear to me where the lovely Ms. Harper is diving from. There's a tree behind the rock, and the rock is too low for her to have leaped off of. Any ideas?

Panel 2:Translation: Damn, I'd like to tap that ass.

Panel 3:Apparently Mark has overcome his revulsion at the thought of sexual contact between human beings and managed to paddle the canoe to the dock. I wonder if he threw up into the lake, or just swallowed it.
Posted by Drogon Saurischian at 7:12 PM No comments:

Well, I owe each and every one of my 12 readers a deep apology. Since my last post on January 4th, three things have happened that have contributed to the complete lack of postings. They are, as follows:

Having arrived in Denver the day before yesterday and having somewhat settled into our temporary, furnished housing, I feel safe promising that I will now be able to resume regular posting on this blog.

So, I apologize for the long delay. Let's see where we are in the latest Mark Trail escapade. For purposes of speed and alacrity I will not use the three-panel commentary approach. Instead, I shall use the three-shot approach in which I will drink three shots of vodka and proceed to undertake a quick word association for each day. Oh, and because I'm a lazy fuck and only use the Seattle PI, I'll only be going back to February 7th (I think). So, let me get some vodka in me.... A slight digression: I highly recommend Tito's if you can find it. Brewed in the fine city of Austin, TX, it's smooth, tasty and suitable for any occasion. And now, let us proceed:

surveillance technology is for the weak

shitting on his desk?

a love whose name cannot be spoken

not just tough, talkative too

The End of an Error

Panel 1:Howdy Doody! Damn, we haven't seen him in months!

Panel 2:What the fuck is he trying to say? Does anybody talk like that? One typically doesn't modify a positive statement with remorse that something else good happened at the same time. Consider: "I enjoyed our date tonight Denise, but many people survived the Haitian earthquake. Ah yes, if only more of those poverty stricken souls had met their demise the other day. Then I'd really have enjoyed our time together!"

Panel 3:Cue the canned laughter! And that, my friends, is a cut. Onward and upward, I say. I wonder what the Jackelrod Sphere has in store for us next?

Panel 1:Nope, I guess he wanted to dry hump Mark....who certainly appears to be enjoying it.

Panel 3:Very subtle, JS, very subtle indeed. Presumably, this is your way of saving a few panels showing us Rusty lying his fugly little ass off. For that, I thank you.

Panel 2:Good job Cujo. Knock that dowdy midget over on your way outside to...what...dry hump Rusty?

Panel 1:"Well, sir, he stinks like the business end of a mink and he's got the common sense of a sack of dirty nappies, but otherwise, he'll be fine."

Panel 2:I suppose it is pretty cool that Rusty grew a mushroom on his foot.
Posted by Drogon Saurischian at 7:47 PM 1 comment:

I interrupt yet another extended interregnum to congratulate Ace Buttockio and Cherry Merkin on the birth of their baby son, Everhard Buttockio. The newest member of the Buttockio clan can be seen here, a few seconds before Ace wrestled him to the ground to change his diaper: 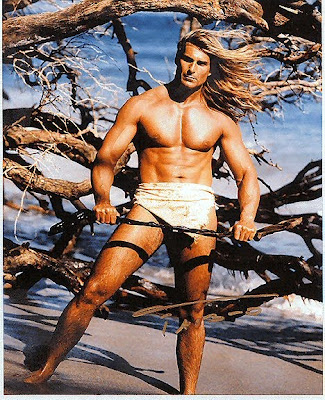 Posted by Drogon Saurischian at 6:06 AM 4 comments: